Over the weekend hackers stole about $150 million in user funds from a number of hot wallets at KuCoin exchange. Previous instances of hacking usually have a negative impact on crypto prices but as the news broke the price of Bitcoin (BTC) and major altcoins hardly budged.

In a recent interview with the Human Rights Foundation, Square CEO Jack Dorsey said that “security is not something that can ever be perfected” and it is a constant endeavor to stay ahead of the attackers.

Dorsey added that Bitcoin and blockchain are the future where every bit of content will exist forever “on every single node that’s connected to it.”

In other news, recently released data from CryptoCompare show trading volumes on cryptocurrency exchange traded products (ETP) plunged from about $186.5 million per day in mid-August to an average of $48 million in mid-September.

A major chunk of the ETP volume comes from Grayscale’s products and according to the data, trading volumes on these dropped to about $40 million a day in mid-September. This shows that investors have stalled their purchases as they wait for the crypto markets to resume their uptrend.

Let’s analyze the charts of the top 5 cryptocurrencies that could start a trending move this week.

Bitcoin surged from the uptrend line on Sep. 24 and has been consolidating close to the $10,800 resistance since then. This shows that the bears are trying to stall the relief rally at the current levels but the bulls have not allowed the price to drop below $10,500. 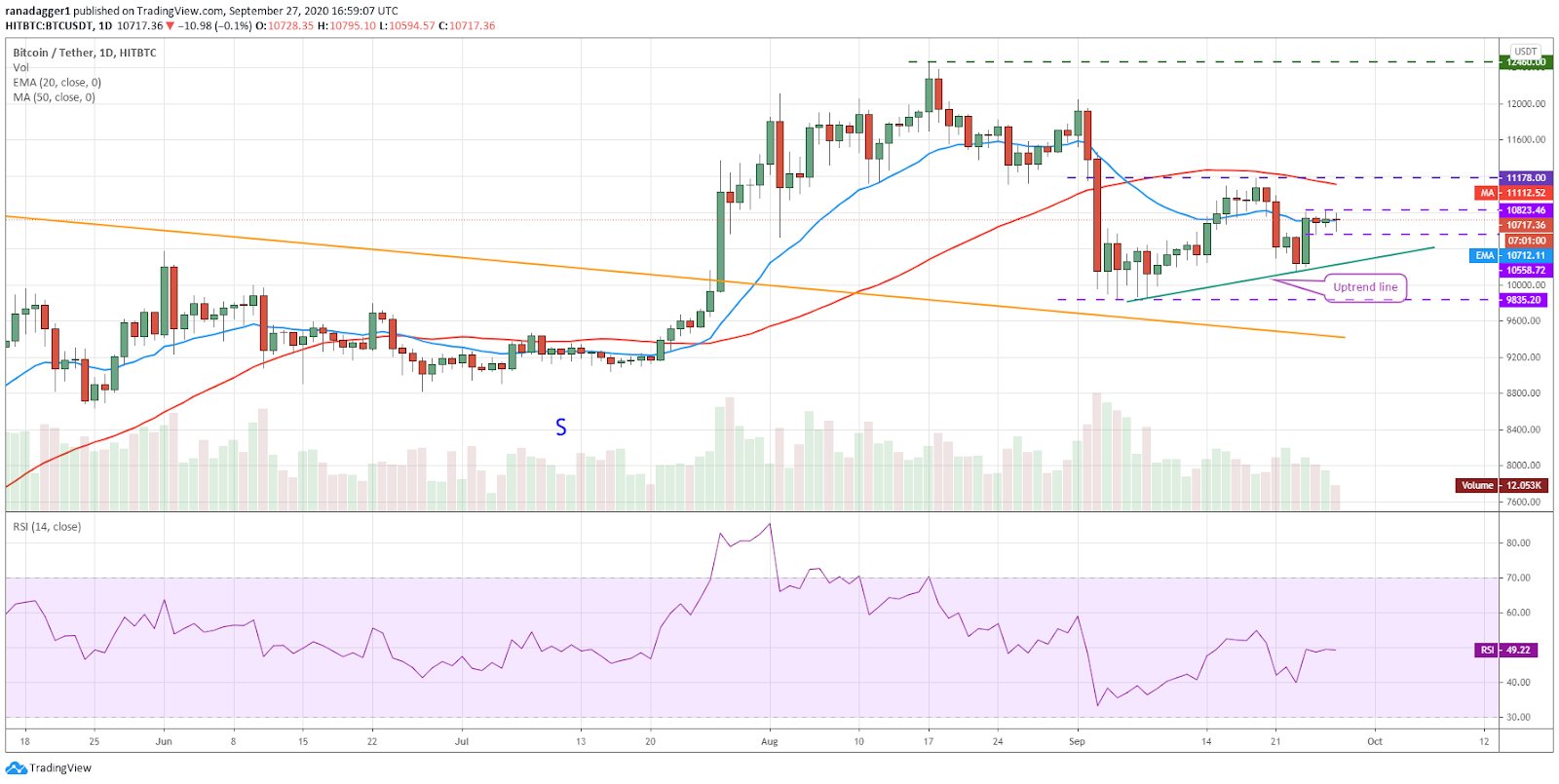 Usually, tight consolidation near a resistance shows that the short-term bulls are not in a hurry to close their position as they expect higher levels. A close (UTC time) above $10,800 could result in a move to $11,178 but it’s expected that bears will defend this level.

The flat moving averages and the relative strength index just below the midpoint suggests a balance between supply and demand. 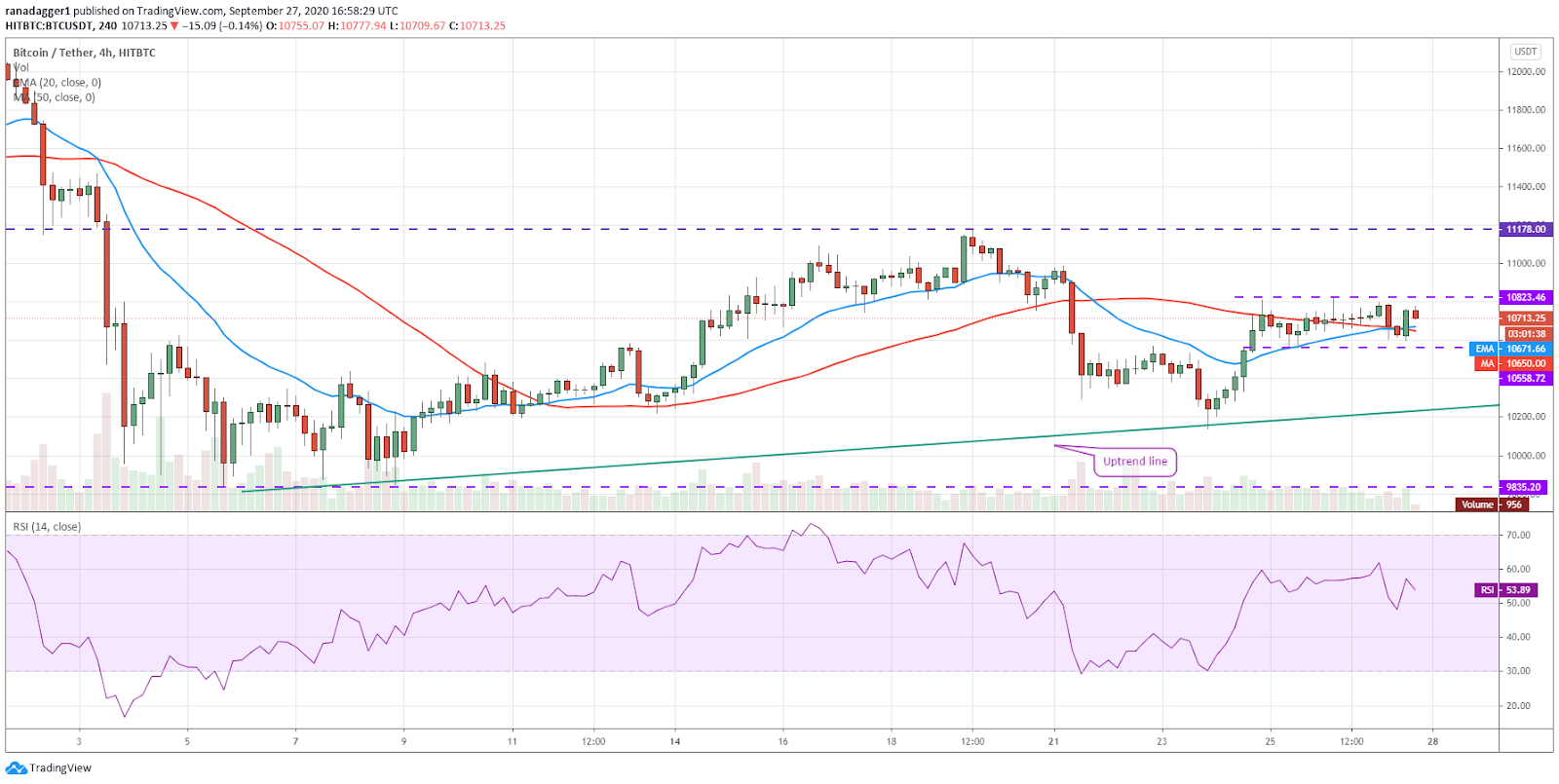 The 4-hour chart shows that the pair has formed a flag pattern following the rally from the uptrend line. A breakout of this setup will increase the possibility of an up-move to the overhead resistance at $11,178.

The RSI is taking support close to 50 and the moving averages have completed a bullish crossover, which suggests a slight advantage for the bulls.

However, the failure of the bulls to push the price above $10,824 is likely to attract profit booking and the bears will then try to sink the pair below $10,558. If they succeed, the uptrend will be in danger of breaking down.

Polkadot (DOT) has formed a large symmetrical triangle pattern, which shows indecision among the bulls and the bears. This uncertainty will resolve after the price breaks above or below the triangle. 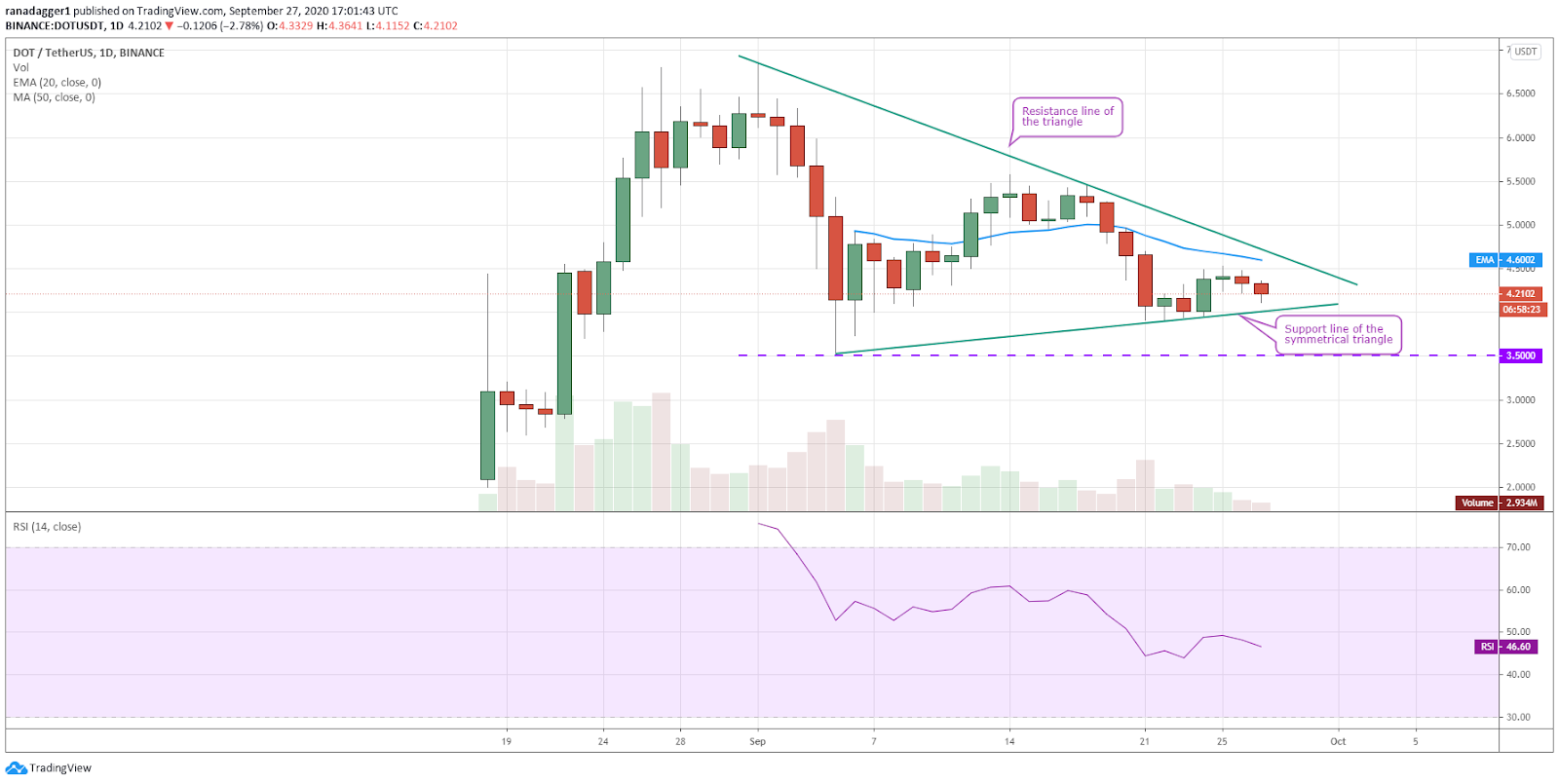 If the bears sink and sustain the DOT/USD pair below the support line of the triangle, it will suggest that the sellers have overpowered buyers. The bulls will try to defend the $3.50 support but a break below it can pull down the price to $2.00.

The 20-day exponential moving average ($4.59) has started to turn down and the RSI has dipped into negative territory, which suggests that the bears are trying to gain the upper hand.

This negative view will be invalidated if the pair turns up from the current levels and breaks out of the resistance line of the triangle. The next target to watch on the upside is $5.50 and above it $6.50. 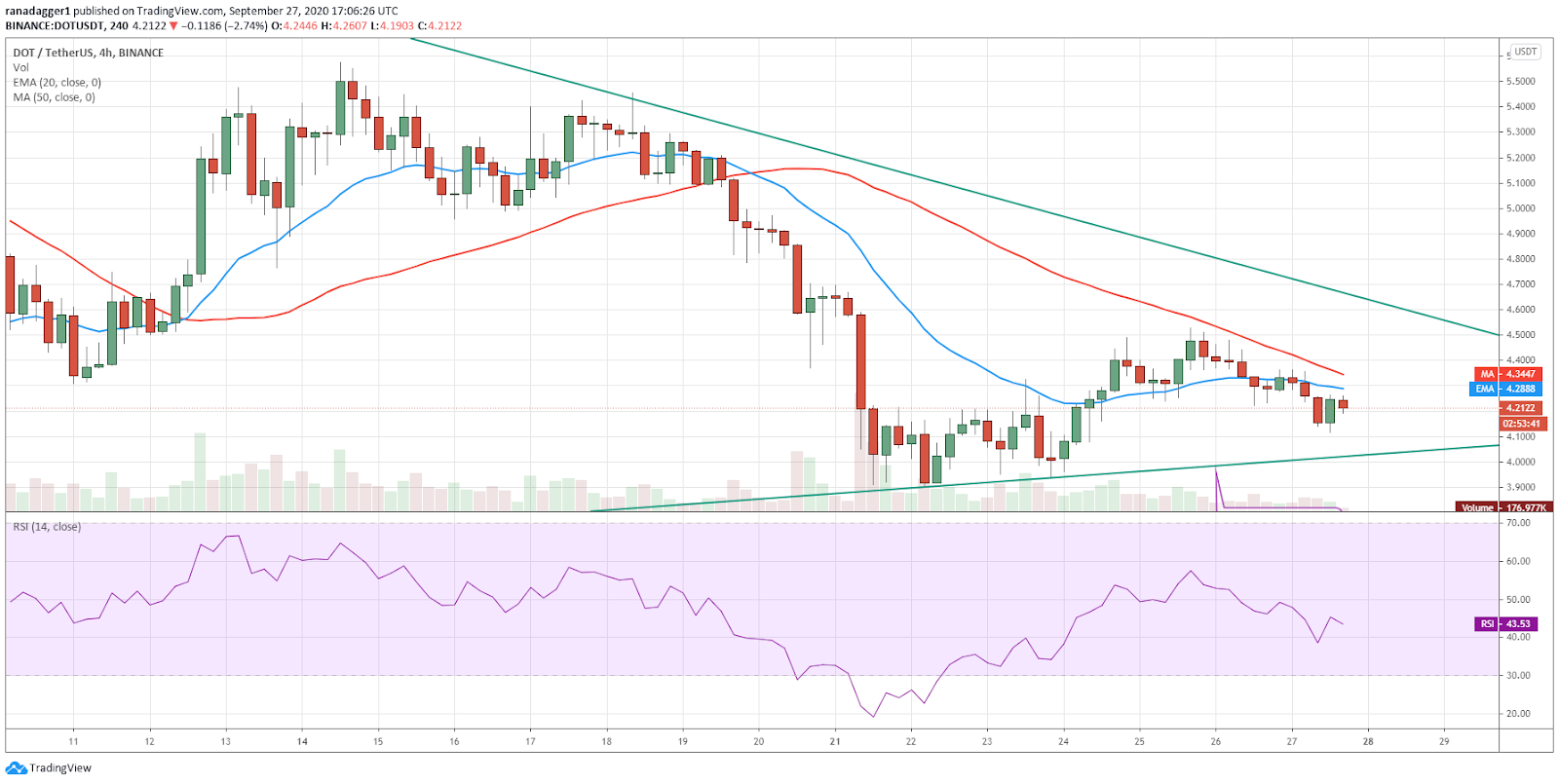 The downsloping moving averages and the RSI in negative territory suggest that the short-term advantage is with the bears. The bears will now have to sink the price below the triangle to further solidify their position.

However, if the pair again rebounds sharply from the support line of the triangle, it will suggest that the bulls are aggressively buying on dips to this support. If the buyers can propel the price above the triangle, a quick move to $5.50 may be on the cards.

Contrary to these assumptions, if the price does not make a sharp move from the triangle, it will suggest that neither party has been able to establish their dominance. In such a case, the pair might remain range-bound for a few days.

Crypto.com Coin (CRO) has formed a descending triangle pattern that will complete on a breakdown and close (UTC time) below $0.144743. After a long uptrend, this bearish setup suggests that the altcoin may be on the verge of making a top. 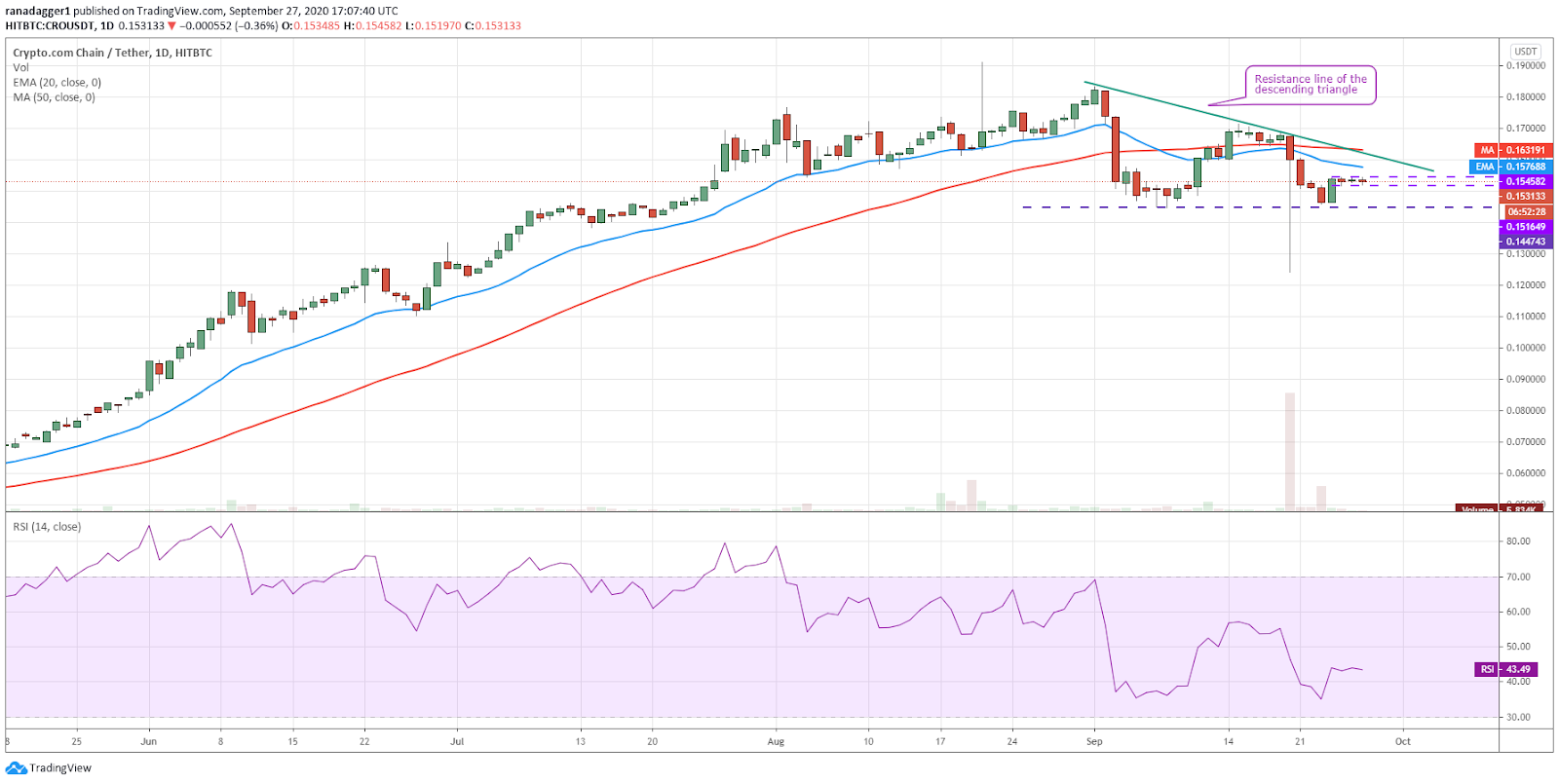 However, if the pair rebounds off the $0.144743 support, it will show that the bulls are buying on dips to this level. They will then try to push the price above the resistance line of the triangle. 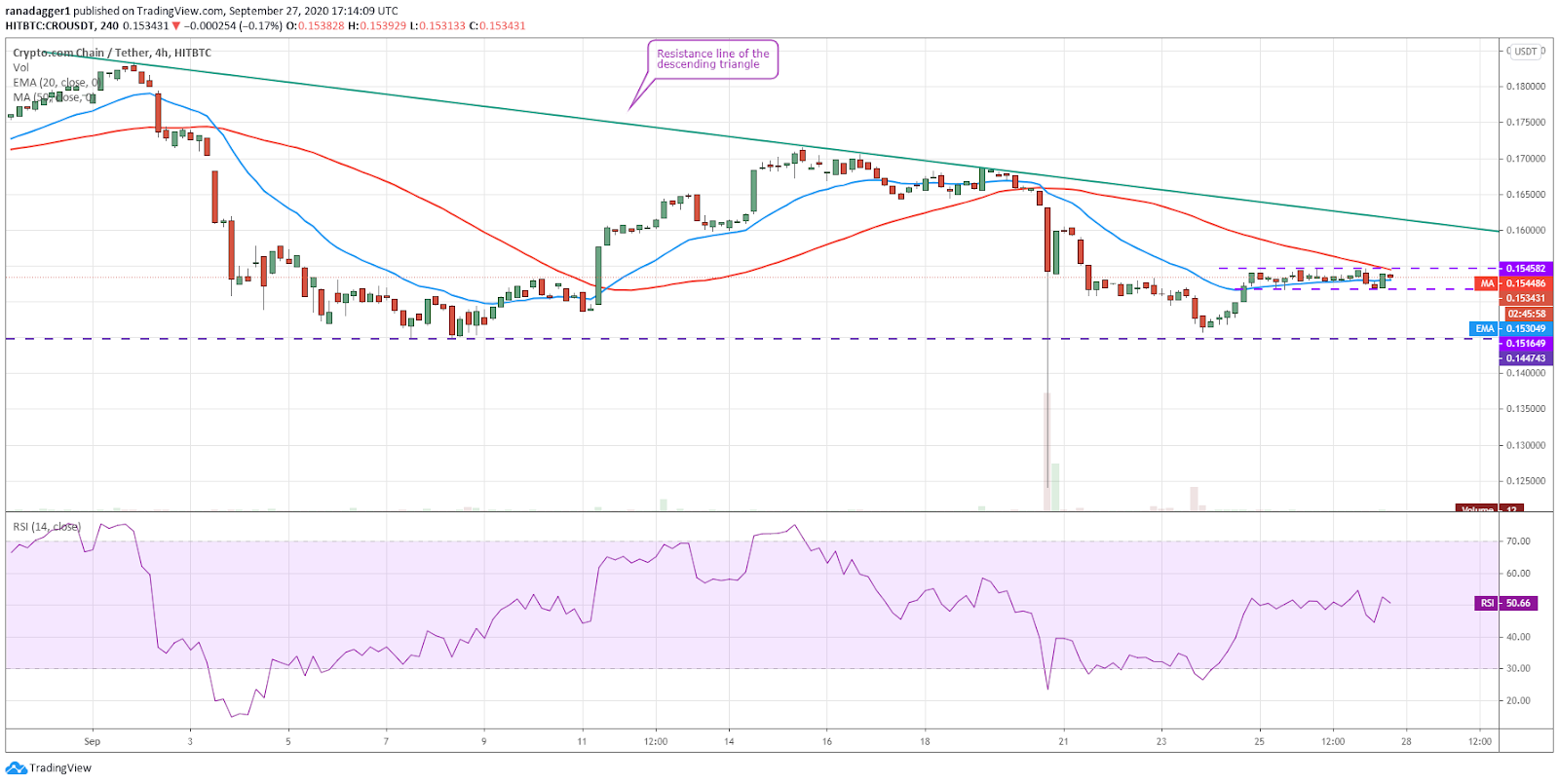 This negative view will be invalidated if the pair turns up from the current levels and sustains above $0.154582.

The bulls pushed NEM (XEM) above the resistance line of the falling wedge pattern on Sep. 26 but are struggling to sustain the breakout. The bears are currently trying to pull the price back into the wedge. 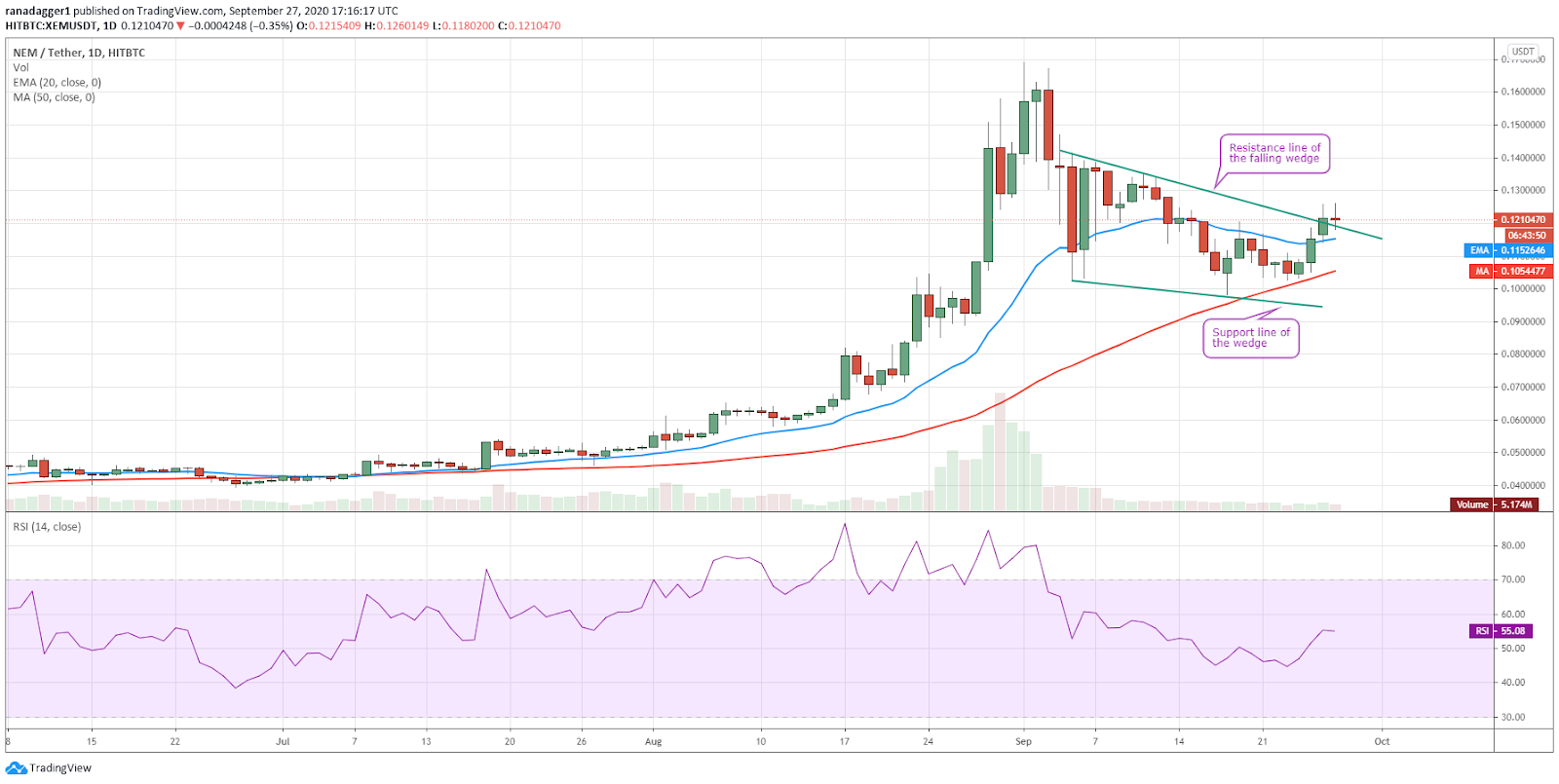 The upsloping 50-day simple moving average ($0.105) and the RSI in the positive territory suggests that the bulls are at a slight advantage.

This bullish view will be invalidated if the bears sink the price below the moving averages and may indicate that the current breakout is a bear trap. 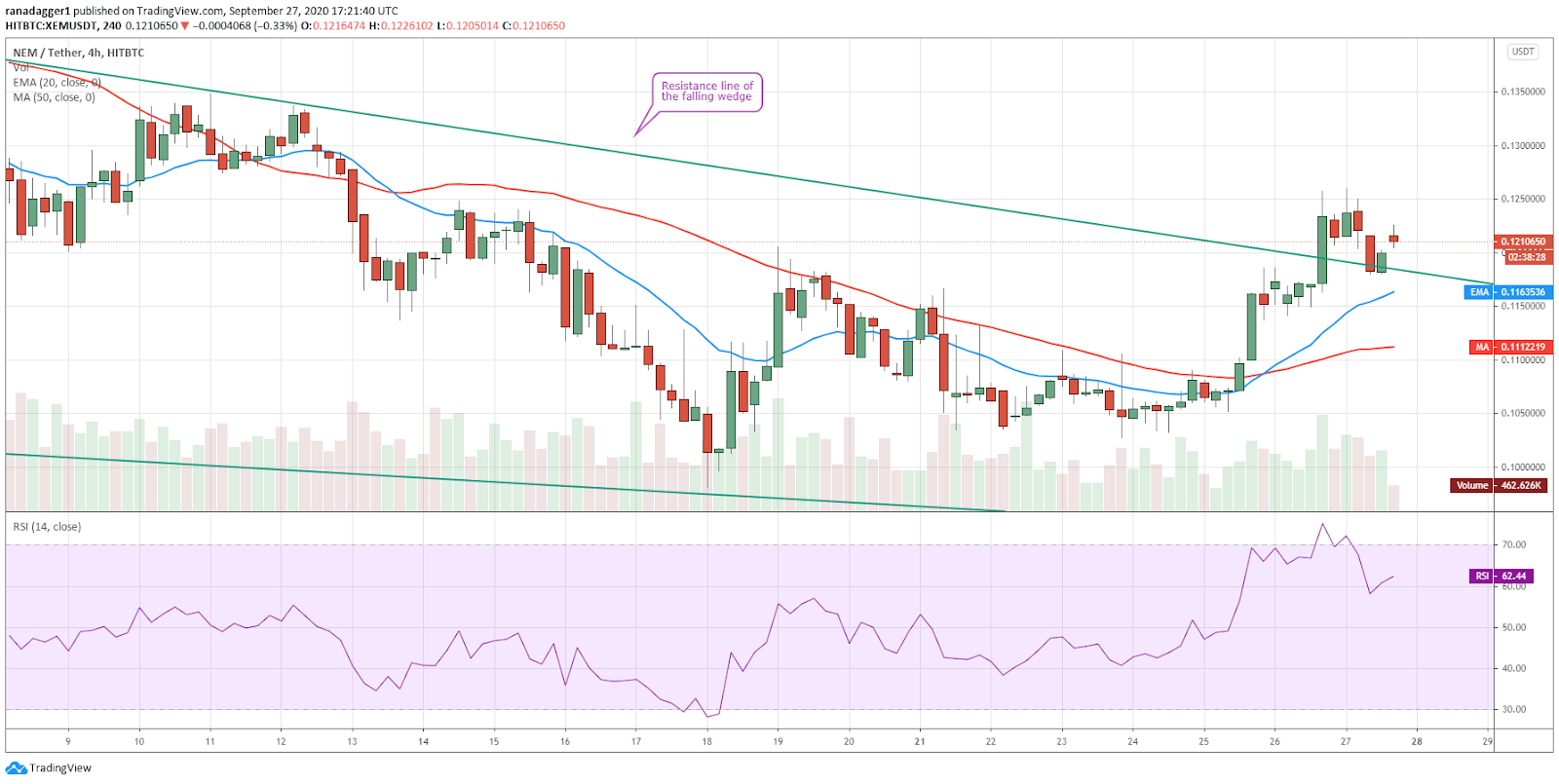 The bears have not been able to sink and sustain the pair back inside the wedge, which shows that the bulls purchased the recent dip to the breakout level. If they can now push the price above $0.1260149 the up-move may begin.

It is unlikely to be an easy path for the bulls because the bears will try to stall the rally at $0.13 and then again at $0.145.

Contrary to this assumption, if the bears can sink the price below the moving averages, the pair can drop to $0.10.

Tezos (XTZ) dropped below the $2.2080 support on Sep. 20 and followed it up with a further fall to $1.9117 on Sep. 21. Both moving averages are sloping down and the RSI is in the negative zone, which suggests that the bears have the upper hand. 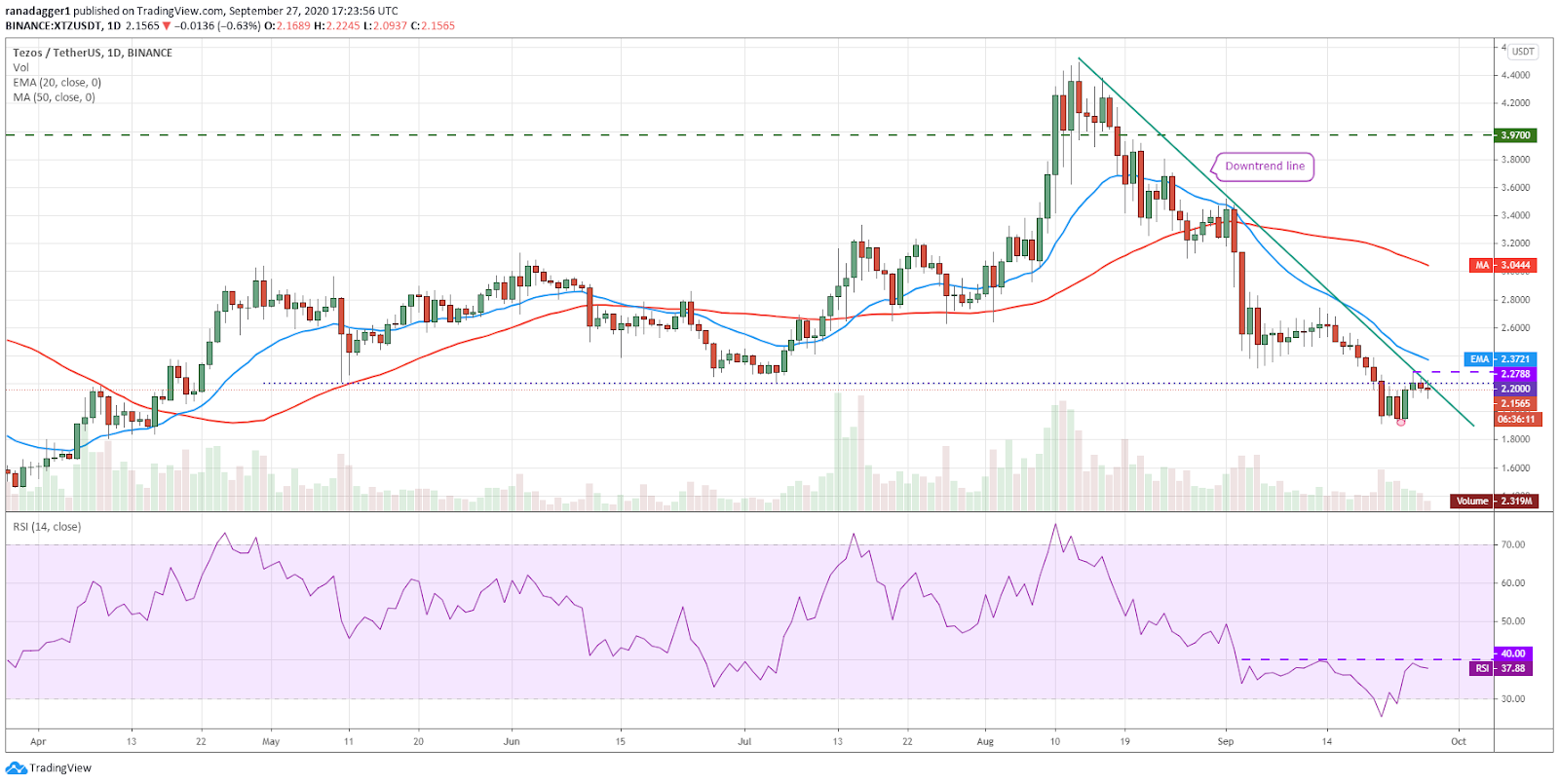 Currently, the bears are attempting to stall the pullback at the downtrend line. If they succeed, the XTZ/USD pair can drop to $1.9117 and if this support also cracks the decline may extend to $1.50.

Traders can keep a watch on the RSI because a break above the 40 level will be the first sign that the downtrend may be weakening. 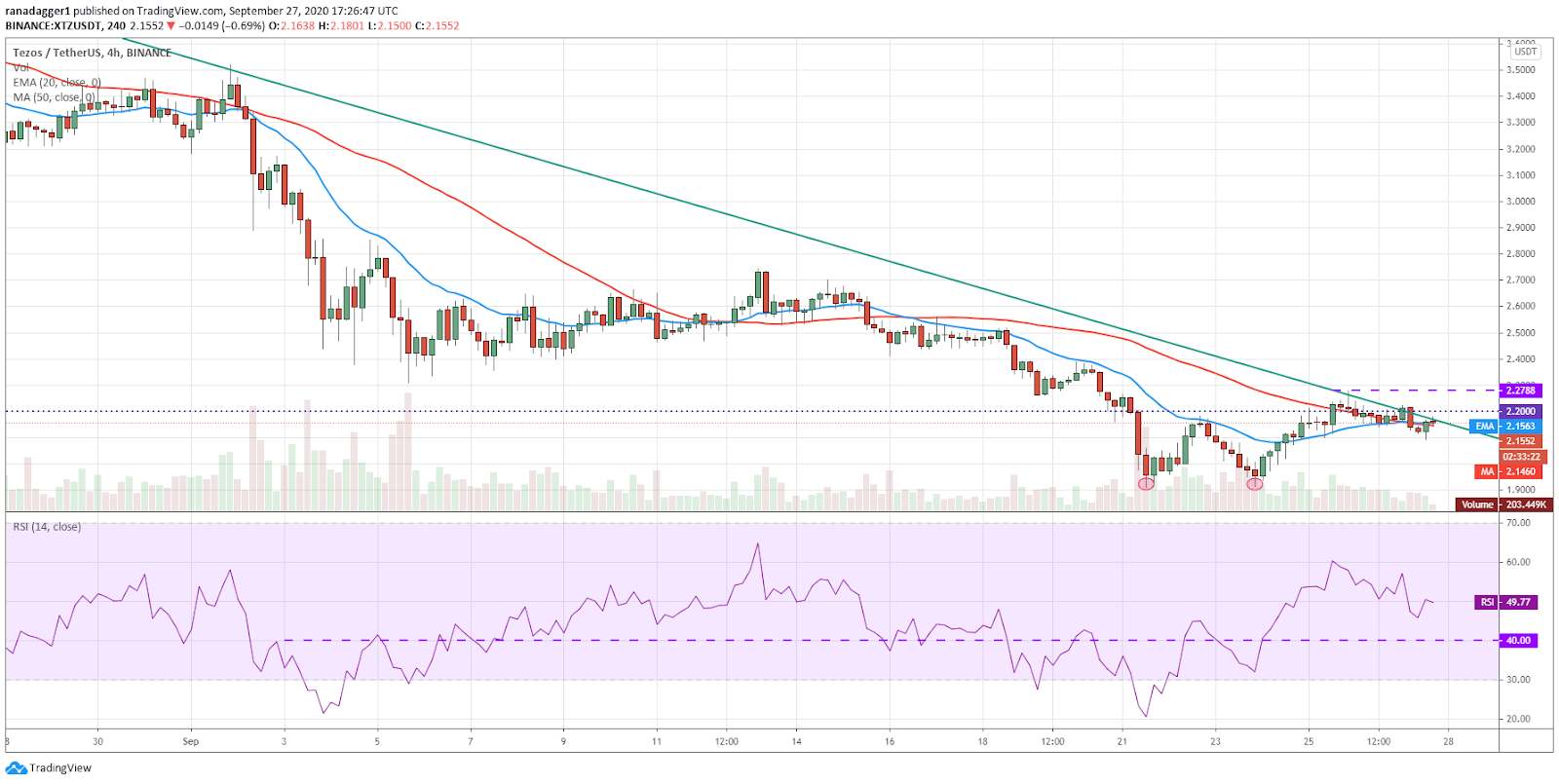 The bulls are attempting to form a double bottom pattern close to the $1.915 level while the bears are trying to resume the downtrend. If the bears can sink the price below $2.09, a drop to $1.9117 is likely and the downtrend could resume.

Contrary to this assumption, if the bulls can push the price above the downtrend line and the overhead resistance at $2.2788, a short term reversal could be on the cards.

The views and opinions expressed here are solely those of the author and do not necessarily reflect the views of Cointelegraph. Every investment and trading move involves risk, you should conduct your own research when making a decision.

Report ranks crypto next to gold in popularity with Russian investors

HOT
0
ConsenSys developer Ben Edgington has published an update that predicts the ETH 2.0 beacon chain genesis will happen within the next six to eight...

HOT
0
The first governance vote for decentralized exchange Uniswap has ended in failure, despite the proposal attracting overwhelming support of 98% of votes cast. Despite...

HOT
0
Hackers compromised Telegram messenger and email accounts of multiple cryptocurrency executives last month by exploiting a vulnerability in a decades-old protocol. The fraudsters are...